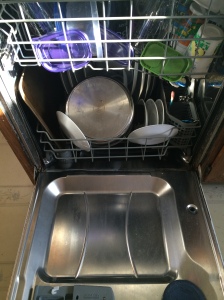 To say I was a precocious kid would be an understatement. Sometimes it paid off. We were getting near Christmas and I was sitting with my father on the couch. I think I was around 11 years old at the time. My father asked, “What does your mom want for Christmas?”

Without skipping a beat, I said, “A dishwasher.”

I knew mom didn’t want a dishwasher because she already had one. Well, two, when you consider I had a brother old enough to do dishes as well. There were very few things I hate doing around the house than the dishes. Filling up the ice cube trays was close, but dishes were high on the list. When I made the suggestion, I was joking. My father looked at me a moment and then went back to watching TV and I never gave it another thought.

Until Christmas morning, when I woke up and went to see what Santa had brought. I glanced inside the kitchen on the way to the living room and there next to the sink was a dishwasher. My mother was thanking my father for such a wonderful gift. I went and sat on the couch, waiting to open my own gifts, amazed at what happened. Later that morning, when my father was out buying yet another pack of C batteries, my mother asked why my father bought her a dishwasher. I said, “Who knows mom. No telling with dad.”

I tried hard to think of what to tell dad mom wanted next year, but I didn’t think he would go for a go-cart.