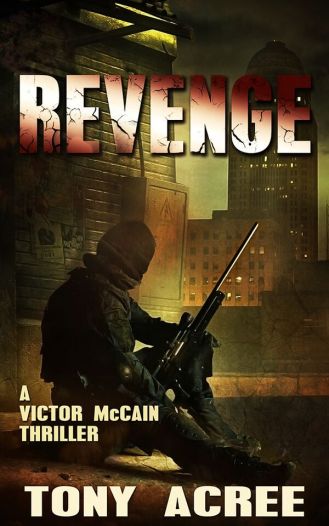 The book launch party for Revenge, the next book in the Victor McCain thriller series, will be November 28th from 2-7 p.m. at Karen’s Book Barn in La Grange, Kentucky. Afterwards we will have a celebration dinner at Big R and Shannon’s BBQ, also in La Grange.

Here is the blurb for Revenge:

With the novel release only a few weeks away, there is the blurb:
Victor McCain, God’s bounty hunter, knows how to hunt down the world’s most evil beings and remove them. Permanently. In Revenge, the thrilling follow up to The Speaker, Victor learns what it’s like to be the one targeted for death.

With a $10,000,000 bounty on his head, assassins are finding their way to Louisville to try and collect on the contract of a lifetime, including Black Ice, the world’s top killer. But he is not alone.

An old foe has returned from the dead to seek revenge on Victor by destroying those he holds dear, including a new love. To save her and the others close to him, he must avoid the assassin’s bullet and the efforts of an angry cop intent on putting Victor away for life and unravel a trail of kidnapping, torture and murder.